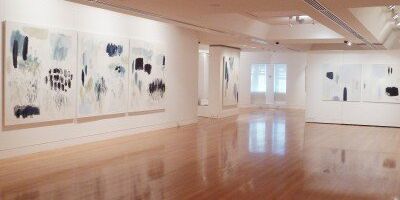 A MEDITATION ON THE WORKS OF WENDY STOKES

There is an archaeology of thought in the work of Wendy Stokes which moves in a reverse order. Rather than digging from the surface into pre-existent layers of notation Stokes builds from the first signs of thought and reaction to sites, seasons and atmospheres. What gradually draws into focus are images of lost echoes, quietly humming grounds and present calligraphies which are seismic records of Stokes’ journey through place and space. An immediacy of gesture and tremor is captured in concentrated cells of mark and gesture as the artist seems to hover there like a dragon fly over water.

I remember viewing a large retrospective of Cy Twomblys’ drawing, painting and sculpture in 1994 at the Museum of Modern Art in New York. The experience for me was profound on many levels however the gradual accommodation and consequent deciphering of Twomblys’ language of mark was compelling. I found myself returning to works over and over to confirm the sense of a small cipher or tremulous quiver within the larger context, first, of the entire work and second, the collection.

Wendy Stokes’ marks, gestures and erasures contain a synergy with Twomblys’ calligraphy which was the result of obsessive modification of formal decisions relating to specific events and places. The result was and is a synthesised visual poetry in which the relationship between the elemental mark and the complete work is refined in the same way a poet prods and squeezes words to hear their elegance and relationship to each other, as words, as language and crafted whole.

At a glance Stokes’ images are sparse, pared back, minimal, indebted perhaps to a Passmore-like brevity or the hovering fields of Rothkos's minimalism. Seemingly minor shifts of tone, hue and gesture recur across the collection as she considers silence or the crack of summer heat. I am reminded also of the music of Keith Jarrett, a pianist who immerses himself in the improvised ephemera of note and chord which builds a whole, lyrical, percussive 40 minute construction of an unrepeatable movement. But this is the delight in Wendy Stokes’ work, the elements repeated in different orders, initially improvised and eventually captured in the visual field of the painting.

Thus, following the glance, with more time her images begin to open, inviting longer, closer scrutiny. One notes deep erasures partially obscured by scumbles and washes deliberately given place by the artist as perhaps the relics of early skirmishes which remain the building blocks, the genetic code of the image. These “edits” accrete to a ground of subtle relationships in pictorial space which, at times, become infinite in depth. At the same time more declarative shapes step up to the foreground. They remind me of Giaccometti and his constant struggle with the “vacuum” of space, the incessant carving with paint and brush handle at the edges of drawn perceptual form in an attempt to locate the “where”, the edge where some thing ends and space begins. There are dark anthropomorphic forms in Stokes’ pictures, they hover like mirages in a searing desert either arriving or departing. They are, to me, things held at the corner of ones’ vision which evaporate or morph in the fullness of the gaze. Here also are echoes of Tony Tuckson and the great thread Abstract Expressionism, where there is no negative space, but more a hieratic interlocking of formal elements of mark, tone, texture and shape.

Stokes’ titles allude to actual events, places, seasons etc, and in so doing manipulate notions of representation, memory and speculation. These elements are present in art, whether figurative or abstract, installed or filmed. The discourse at the surface, as a result of material/spatial interaction with the viewer is just the beginning of what Robert Hughes coined as the “long look”.

For me this includes what one takes away in order to roll it through the presses of memory. In this realm Wendy Stokes makes images of contemplative force which become a kind of cartography of the remembered and the forgotten. 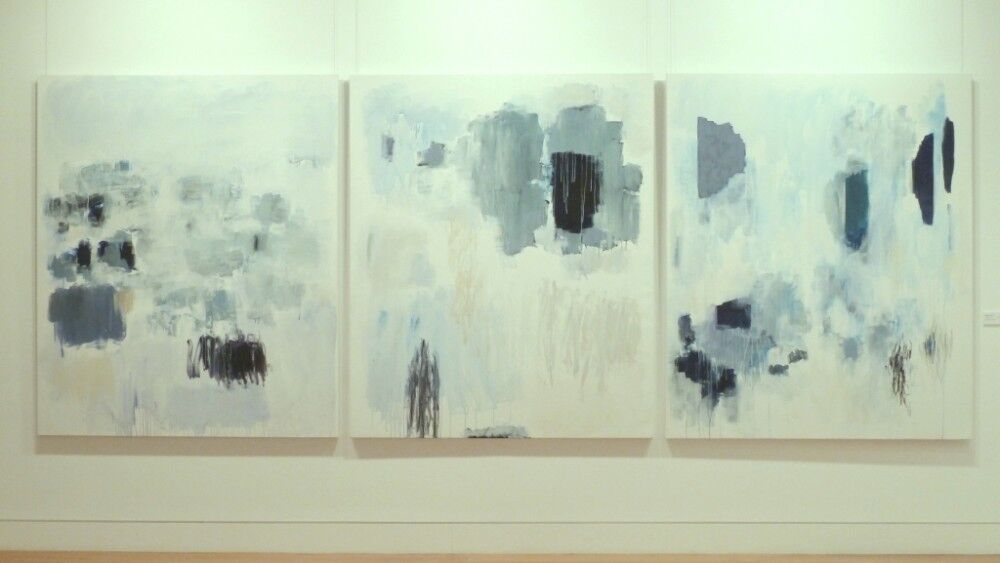