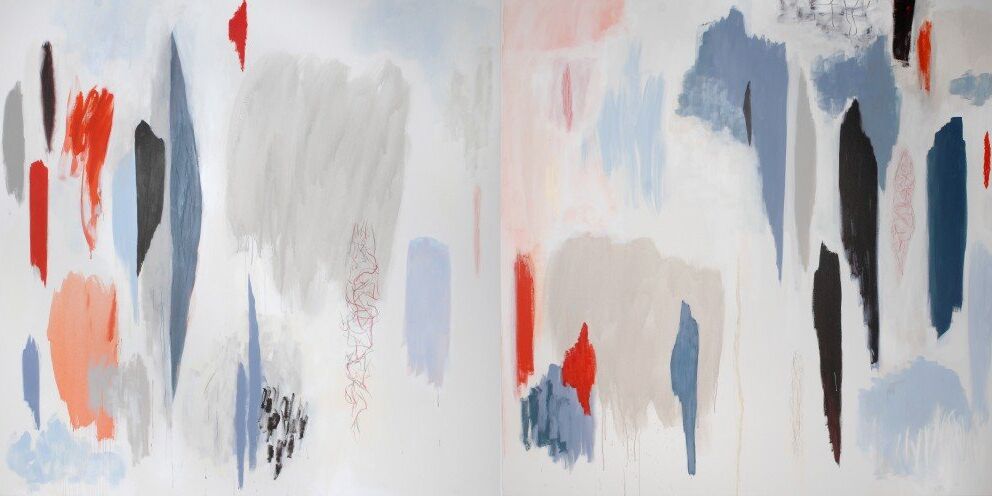 In almost any painting the manipulation of space plays a crucial role. The temptation for the viewer is to see every picture, with or without a frame, as a window onto the world. We gaze through this imaginary window into deep or shallow space, barely pausing to consider the commonsense truth we are actually looking at a flat surface.

Landscape and atmosphere play an important role in Wendy Stokes’s paintings, but she creates spaces that are perfectly ambiguous. We might try instinctively to see the shapes of clouds, trees, rocks or mountains, but it is hard to go beyond the immediate impression of paint on canvas or paper. We stare, first of all, at a random arrangement of smudges and delicate threads of paint, before starting to read these shapes as the embryonic forms of a landscape. It is as though the colours and textures of a place have been detached from their natural setting and allowed to float.

The inspiration for this body of work came from Stokes’s visit to her rural childhood home, where everything had vanished except the last vestiges of a garden her mother had planted and maintained. Another artist may have focused on that which had been lost, but Stokes was touched by a red bud she spied in the undergrowth. Hence the title of this show: Resilience.

It might just as easily have been called Evanescence. Stokes’s forms can be slight and fragile, as if she wants viewers to feel the fleeting, ungraspable nature of our thoughts and memories. No impression is ever lost once it has been perceived, it is merely buried in some distant corner of the mind awaiting the stimulus that will bring it back to consciousness. Memory may be “bleached”, as Stokes’s titles suggest, but it cannot be erased.

Stokes has set herself the difficult, if not impossible task of painting the subliminal. By definition this means she is trying to capture impressions that lie beneath the surface of consciousness. To work in this manner the artist has to act as a conduit for whatever forms bubble up from the depths of memory, no matter how bleached or truncated. Because the route from the subconscious to the canvas must pass through the shaping intelligence of the painter, Stokes is not simply jotting down shapes in an arbitrary manner. There are rhythms and patterns in these works that satisfy a deep-rooted need for meaning and order that is probably part of our biological make-up.

All art is a compromise of sorts, an arm wrestle between intention and failure. In these deceptively simple paintings Stokes has set the bar so high that she can barely hope to succeed, if we believe that an artwork must achieve some form of ideal resolution. For Stokes, each painting remains an open proposition, full of suggestions but leaving the door open to our own imaginative investments. Perhaps the best way to proceed is to follow the artist by emptying our minds of anxieties, inhibitions and distractions, and surrendering to the experience of sheer visual pleasure.

John McDonald is art critic for the Sydney Morning Herald