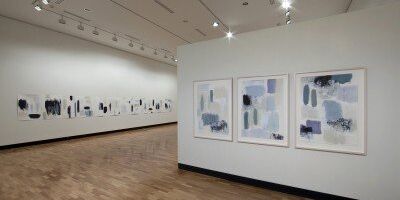 In a current context we are constantly bombarded with information, visually and aurally, voluntarily and involuntarily. Context becomes fragmented, desensitised and subdued. Transience is an exploration of the notion of that which is fleeting, whether a glimpse, a memory, an echo of place, or that idea which the artist responds to spontaneously, which is of that time and is in itself complete.

I am interested in setting up a space, a presence in that one may engage in a dialogue, between the tangible and intangible, an interface where strength, fragility, transience and constancy coexist. As a maker of the work, participating in relationships which shift and alter in a moment, while some aspects remain static and anchor continually provide sustenance.   Wendy Stokes

Our place in the world is established through what we experience, and what we observe of our surrounding environment. To experience visually and to transform these experiences into artificial terms requires a sense of empathy, of understanding. The process of creation for an artist is based upon this knowledge and interpretation, it is the blending of experience gained in life; it is a form of information exchange.

The role of the artist has always been that of an image-maker who attempts to engage the audience in the beauty, challenges or ideologies of the world that surrounds them. Different times require different images. Stokes comments in her artist statement that we are living in an era where the pace of life has become faster, where there is an expectation that gratification should be instantaneous, a world that constantly bombards us with noise and visual stimuli. A materialistic world, that leaves little room for imagination, or for the contemplation of art. However, the works created for Transience demand that the viewer stops and takes the time to look, to consider. This act of stopping and contemplation creates an island of thought, an oasis of undisturbed attention, and an environment to recover in.

Residing at Port Macquarie, on the mid north coast of New South Wales, Stokes has continued to develop an intimate relationship with ‘environment’. Her environment has encompassed, the edge of the ocean, the infinite space over the ranges and the snow country, all being integral to the landscape experience. The coastline, the water, the snow and the atmosphere are elements sensitively suggested and blended in her work, but it is the depiction of space that has become the integral component; actual spaces, spaces of memory, the experience of vacancy, dormant energy, and the silence of such spaces. Stokes creates works that explore the notion of that which is fleeting, a glimpse, a memory, a sense of time and place .Our eyes are drawn back and forth between passages of colour and texture and large areas of vacant space. This push pull experience is crucial. The spaces in between are like intervals in music, the silences in between the sounds, and establish a rhythm within the painting.

These gestural, expressive works display a confidence and freshness which are suggestive of place but without fixating on specific or literal elements. They are intuitive expressions rather than intellectual investigations. The paintings are full of meaning even if there are no trees, figures or cognitive elements; it is the balance between spontaneity and control that creates the dialogue. Areas of calligraphic detail offset the large flat areas of colour or untouched surface. One senses in these works that there are elements that are being simultaneously revealed and concealed.

The surfaces oscillate and vibrate creating a sensory response of air, light and land. The works appear to light up from the inside through the relationship of both the quality of the painted surface and the colours used.

When I visited Stokes in her studio to view the work in preparation for this exhibition I stood in front of the paintings and let my eyes wander, I experienced a sense of delight as I followed the movement of brush and paint across the surface. These works are of things seen and experienced, engaging the eye and the mind simultaneously through suggestive passages of paint and mark.

Painting is not a matter of copying the object slavishly; it is a matter of discerning a harmony between many relationships – Paul Cézanne